Origins of the Breed

Blue Texels were first recognised and recorded in Holland in the early 1970s, with blue sheep accidentally born to white Texel parents.

Deliberate matings for the blue factor followed, and more blue animals were found in white Texel flocks. By 1983, there were 11 flocks with 213 blue sheep.

With the formation of a breed society for these sheep in Holland (Stamboek Blauwe Texelaar), numbers have now risen to 8,000 sheep in 300 flocks.

Blue Texel flocks in Britain have now been formed both by importation and from blue sheep born in British white pedigree Texel flocks. There are now around 300 registered flocks in all parts of the United Kingdom.

What are Blue Texels?

Blue Texels are similar to white Texels, but express the "blue" (Abl ) coat pattern. This is a recessive gene in the Texel breed, and Blue Texels breed true for it. Blue sheep are found in all Texel types from the smaller Dutch Texels to the larger Texels common in Britain. There is evidence of higher fertility in Blue Texels.

The blue pattern can vary from very pale animals to quite dark, but no part of the fleece is wholly black or white. The black head, ears and legs have symmetrical white markings. The flank wool is lighter than the shoulders and belly, sometimes a pale silvery blue.

If two white Texels carry the blue gene, there is a 25% chance of a blue lamb from a mating. Matings between blue sheep will always produce blue lambs. 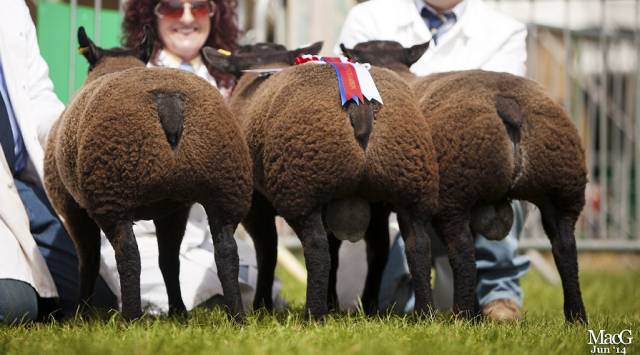 Uses of the Breed

Blue Texel rams are competitive as commercial terminal sires for producng prime crossbred lambs for the trade. As the colour pattern is recessive, most crossbred lambs will be white.

They also have a niche role as a terminal sire for coloured or rare breeds, to produce meaty coloured crossbred lambs, with possible added value from fleece, yarn, felt and furskins.

For the small pedigree flock owner, Blue Texels are attractive and friendly occupants of home paddocks, parkland and orchards. The ewes are docile, thrifty and good mothers. They tend to have narrower heads than the more extreme Texel types, and therefore avoid the lambing problems sometimes found with the white breed.

Q. Where does the colour pattern come from?
A. Like all other white breeds, modern Texels contain genetic material from the earliest sheep, including the recessive colour patterns. Blue Texels have been bred to select this colour. Other factors, like higher fertility, may be linked to the colour gene.

Q. If I put a Blue Texel ram on my commercial flock, what colour will the lambs be?
A. White, mainly. There may be a few coloured lambs if you have colour carriers in your flock.

​Q. Why are they called "Blue"? Is this the same as Bluefaced Leicester?
A. No. "Blue" is the geneticists name for the colour pattern, and also describes the colour of the flank wool. White "bluefaced" sheep just have dark skin on their faces.

Q. Could I register a Blue lamb from white parents?
A. From 1st January 2016 all lambs must be bred from Blue parents to be eligible for registration.

Q. I've got some black Texels at home. They were originally crossed with Black Welsh. Are these the same as Blue Texels?
A. No. The dominant black gene from the Black Welsh or Jacobs is totally different. These crosses do not breed true for colour, while the recessive blue gene always does.

Q. How about showing Blue Texels?
A. Blue Texels are doing well in the show ring. Their distinctive appearance stands out and takes the judge's eye. They have taken Championships at the Royal, Royal Welsh and Three Counties Shows, as well as many smaller Shows.

Blue Texel Sheep - The terminal sire with a difference